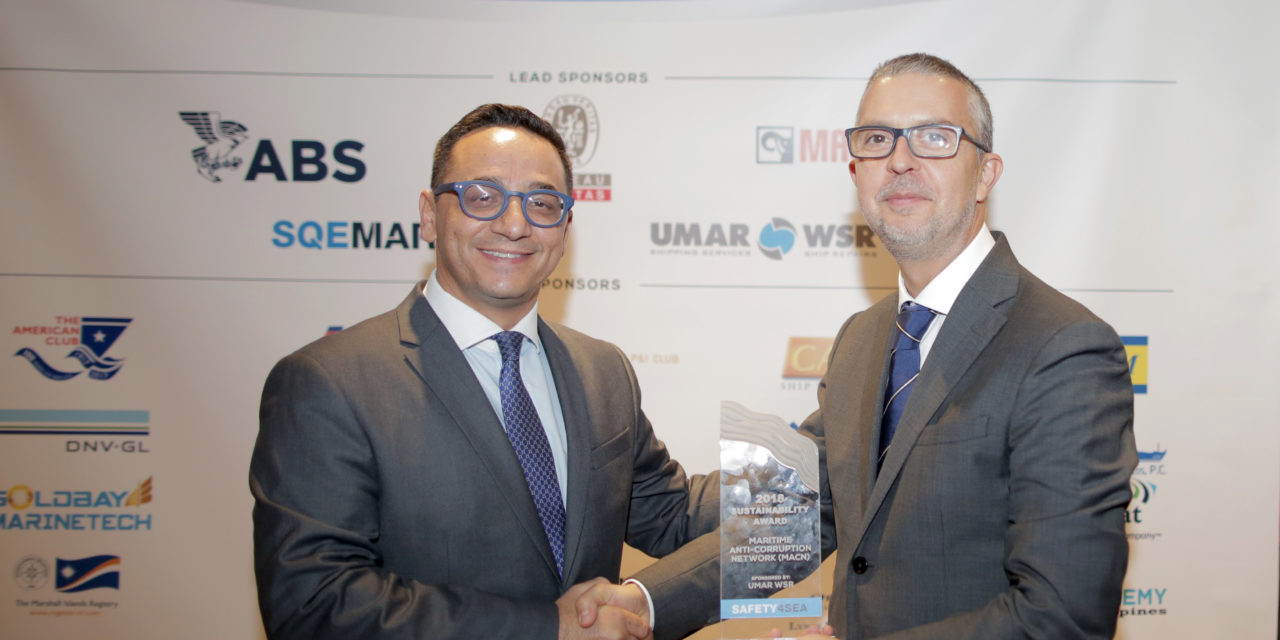 Earlier this month, MACN was delighted to be awarded the SAFETY4SEA Sustainability Award, sponsored by UMAR.

The winners of this year’s Awards were announced at a prestigious ceremony which took place on Tuesday 2 October, 2018 at the Yacht Club of Greece.

The awards focus exclusively on initiatives and individuals who foster Safety Excellence & Sustainable Shipping, following a combination of open nomination and audience-vote.

“The Maritime Anti-Corruption Network understands that our economic and technological growth often come at a cost. Ethical business practices are being tested and corruption is a major problem that costs trillions in bribes every year. It distorts competition, deters the free market and delays further development of social and economic growth. The answer to this centuries-old problem lies in developing corporate cultures with strong business values that understand that ethical behaviour and transparency actually add competitive advantages to organisations while enabling more trustworthy business relationships and lower costs.”

“Corruption is a real threat to the people who work on our ships and it damages our business and reputation. Shipping is not alone in facing this enormous problem, a problem that is too-often excused as being too hard to solve: ‘it is the way things have always been done. However, in the fight against corruption the shipping industry has shown unparalleled leadership. The Maritime Anti-Corruption Network is now over 100 members strong. We have shown that shipping companies – working together – can be more effective in fighting corruption than any regulation or press expose.”

MACN would like to thank everyone who voted for us. This award is great recognition for the hard work and commitment of our seafarers, member companies, and partners.

In 2015, MACN was the winner of the second annual TRACE Innovation in Anti-Bribery Compliance Award (IACA) for its efforts to create an industry-wide compliance culture through collective action.