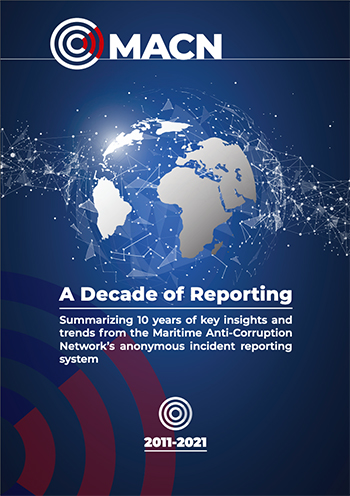 The Maritime Anti-Corruption Network has released the results and lessons learned from 10 years of collecting data of corrupt demands in maritime trade.  This data has been collected in over a decade through MACN’s Anonymous Incident Reporting platform, a system designed to allow the maritime industry to report when it has been faced with corrupt demands in ports globally. To date, the reporting system has close to 50,000 incidents reported in over 1,000 ports, across 149 countries.

This report – the first of its kind covering maritime corruption – provides a unique insight into the scale, type, and volume of corruption in the maritime supply chain. MACN is pleased to share insights and experiences of why data collection is important to drive change and reduce corruption.

Data shows the extent of a global problem

“At a time when supply chains and economies are under increasing pressure, corruption is having a real impact on trade and livelihoods – onshore and at sea.”

During the Covid – 19 pandemic MACN has noticed that the incidents have dropped in numbers, most likely due to reduced interaction with port authorities and increased adoption of electronic systems for vessel clearance.

“Despite increased awareness of MACN’s reporting system globally we see a slight reduction in reporting. We can carefully draw the conclusion that some of the mitigating actions taken to reduce health risks are also having a positive effect by limiting the person-to-person interaction usually associated with corrupt demands. We hope this trend will continue in the post-Covid era,” says Müller Torbrand.

The report demonstrates the importance of data collection

The report highlights regional and temporal trends and features further analysis of top ports. The report also helps to emphasize the importance of MACN’s incident reporting system, demonstrating the value of the data to stakeholders in the maritime industry, governments, and civil society partners. MACN’s incident reporting not only highlight’s the issue but also to provides a benchmark by which to measure the effectiveness of port governance and of anti-corruption initiatives taken by MACN and other stakeholders.

The data has progressed and developed MACN’s in-country work, serving as a door opener with governments globally. The data is not intended to serve as evidence or to replace law enforcement but, in several countries, it has triggered actions such as further investigations, gap assessments, integrity training for port officials and improved port governance.

Müller Torbrand said “MACN was founded in 2011 because the shipping industry saw the need for private sector action. Corruption hurts our seafarers and staff and damages our business. Regulations and law set an important foundation but, as this data shows us, this is not enough to drive on-the-ground change.”

The full report can be accessed here:

The Maritime Anti-Corruption Network (MACN) is a global business network that provides a unique forum for businesses to contribute to the elimination of corrupt practices in the maritime industry. MACN is composed of vessel-owning companies and others in the maritime industry, including cargo owners and service providers. MACN was established in 2011 as an industry-led collective action initiative, with a goal of stamping out corruption in the maritime industry and promoting inclusive trade. With over 160 companies across the maritime industry, MACN has a strong industry voice, playing a key role in ocean transport. MACN has become one of the preeminent examples of an industry-led collective action network taking tangible steps to eliminate corruption across the wider supply chain. By working in partnership with the industry, governments, and civil society MACN has been successful in addressing corruption risks through country-specific actions in locations as diverse as Nigeria, Indonesia, Egypt, India, Ukraine, and Argentina. MACN’s initiatives have been welcomed by stakeholders and have resulted in tangible outcomes such as the removal of trade barriers, strengthened governance frameworks, and substantially reduced corruption risks in maritime trade.

In Conversation – Special Focus on the fight against maritime corruption...